While the work consists of numerous layers including text, pictures, video, chairs and desks, its presentation is simple yet impressive. The critique session began with an investigation of the artist’s intentions in the construction of this exhibition. Watanabe’s comment, “With the opportunity of holding a solo exhibition, I used a method of placing all work together in the space, and then deducting things. It would have been better to leave everything in more confusion. My intention was to mediate through the text, pictures, and video simultaneously.”

Watanabe’s Thoughts after the exhibition
In response to the comment from Watanabe “next I want to concentrate only on video to show them on a screen in a more ordinary manner”, many participants answered that this should be given careful consideration. “Wouldn’t you lose the interesting impression left by this (investigation) in showing it as a “finished work” (Bart); “through the mixture of many different media, the viewer is made to think and is drawn into the work, expanding the possibilities of the space. Even if it were to be shown on one display, a method should be used which leaves this sort of feeling” (Sam). Watanabe took careful note of the advice. 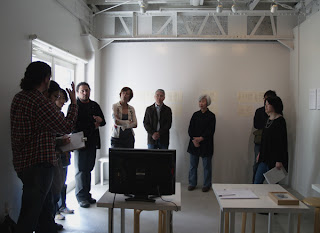 In relation to the motif of the work, the question was made, “is “war” the theme you are using?” (Bart). In response to this and similar questions which followed, she answered; “The reaction of individuals when they meet with surges in history or significant historical events in their lifetimes is one of the themes on which I focus. One point is that within the speakers’ stories, there are those which are interesting yet sorrowful, those touched with sadness yet enjoyable.” In relation to the fact that many of the interviewees asked to tell their stories are over 60 years of age, Hiroko Murata made the insightful comment, “the thoughts of each individual become the theme of the work, and so rather than stories, it appears you are looking for people who have interesting things to talk about,” to which Watanabe was also in agreement. People were not interviewed in order to gather materials, rather the stories were gathered from natural conversations with people familiar to her, and so the production of the videos took a long time. For this reason Honma, a close friend of the artist, commented “the work has come to reflect your own character”. An additional insightful comment by Yuuri was that “the older the grand historical event talked about, the less degree of empathy there is in the viewer, and as such the setting of the work (young people telling the stories of elderly people as if they were their own) is what emerges as an interesting element” (more interesting, for example, than dealing with last year’s earthquake), to which the artist also agreed. The events talked about are evidently old, yet they are limited to the time axis within which the person speaking exists, and are different from an event in the Edo Period, for example. 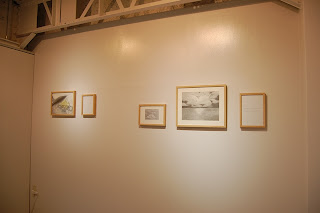 In response to a comment made about the position of people speaking in the video, Those talking in the video have seen the pictures you drew to correspond with the stories. But might it not be simpler and easier to convey what you want to say by showing pictures drawn by those appearing on screen?” (Murakami), the artist replied that she would like to try this. There was also the view that “it is similar to the feeling of talking, without realizing it, about someone you know as if you were them. So actually, I don’t feel a sense of disparity in this work” (Utako). In answer to the question “should the viewer know that the stories and people appearing in the video were found through your own connections?” the artist responded “it isn’t necessary that the viewer knows this. It’s fine if it is only understood that young people are simply telling   the stories of elderly people from a different generation”.

At the end, the artist stated that the exhibited work was complete in its current form, but her plan was to continue in the same direction. In answer to the question “are you planning to have just one speaker?”(Hiroko), the artist spoke of aspirations to “find more people who have even more diverse backgrounds”. 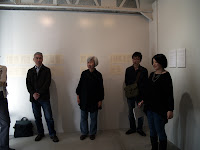 As the majority of participants were artists, constructive and sharp feedback about the structure of the exhibition and the method of presentation was achieved. In addition, as the generation and cultural background of the participants differed, various interpretations, questions, and ideas about the contents and themes were proposed. Watanabe’s independent approach to her work became distinct through the session, and it seems that through the process of answering questions posed by the participants, future issues and directions of the work became clearer. After the session, the artist herself stated that it had been valuable, adding that opportunities like this to have a discussion about her own work were rare. Though the session was moderated and translated simultaneously by Utako, it ran without problem due to the eagerness of Watanabe and the participants to contribute. It would be ideal if sessions henceforth also involved the least level of moderation, the discussion developing naturally from the dialogue.