<Explanation on the project by the organizers>
Since the start of the 2000s until now, a group of artists who had worked actively together in LA have dispersed to continue their practices in various locations around the world. Taking this condition as a starting point, they initiated the Hayama Project and later, taking the observation of location and time as theme, they initiated the project ‘T/here’. T/here aims to be an exhibition and a magazine publication, the positioning of the magazine not simply taking the form of an exhibition catalogue (explanation of the exhibition) but the creation of texts exploring related ideas to be distributed in places other than the location of the exhibition (including overseas). In Japan, when considering the difficulty in searching for non-commercial exhibition spaces that moreover, are not rental galleries, Youkobo was found to be the ideal place for this exhibition, the Youkobo mission and structure of the exhibition having a strong compatibility. 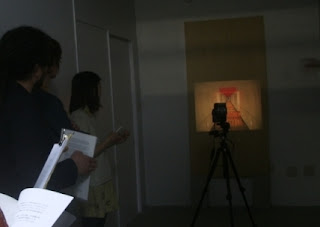 A non-linear stance can be said to be a particular trait of the literature of Yvan’s home country Venezeula and the basis for the work. The refined visual sense of Chicago born Joshua is an equally important component. The work takes characters from a never-filmed John Waters screenplay and places them in a new narrative written by Yvan. Using a technique of appropriation, characters and locations are illustrated using photos of criminals taken by the Miami Police Department available online and photos of generic hotels. Multiple stories interweave and split to form multiple possible realities, loosely following the principals of quantum theory. In this work images of surreal hotel hallways seemingly upside-down are constantly repeated; ‘possible futures’ are revealed while giving deep thought to the act of ‘choosing’.
From a contextual point of view, the work cannot be said to be easily understandable for a Japanese audience, but it can be appreciated as an object from a visual perspective. The old projector is suggestive of a camera used in a film shoot, and the projection onto a wooden board that blocks the window is also a symbolic gesture. 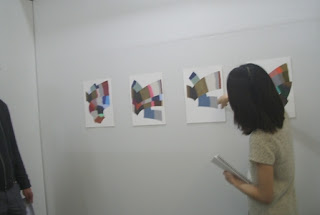 Xana makes portraits of moving objects in the form of collages and drawings. Through her emigration to L.A. from Berlin, dramatic changes occurred in her working environment. In contrast to Berlin, where it is possible to navigate the city using public amenities, in moving from one place to another by car on highways in L.A. you are reminded of your isolation. It may be that the repeated pattern and the layering of traces of wax-based pencil crayons reflect these conditions.
The work of Bart (session participant) in which selected landscapes are photographed from expressways is different in style, but in the same way reflects the speed and time processes of contemporary society where the buildings which are caught while moving appear to resemble one another.
The artist is known for her technique of collage, but in her drawings there are also structures which evoke movement both in-front and behind, a form of layering in which her fundamental concepts remain constant.

‘Room 2 (After Dawn of the Dead)’ by Mike Chang 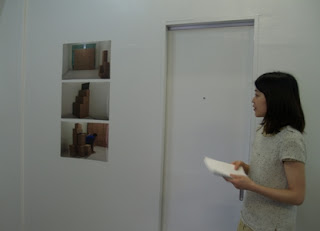 ‘Dawn of the Dead’, a movie critical of consumer society, is the focus of this work. In the movie, a group of shoppers are trapped in a storage room inside a shopping mall after being chased by zombies. They begin to recreate the life they led outside the mall by stacking cardboard boxes to make furniture and household amenities, ironically creating an alternate version of consumer society. Mike draws parallels between the protagonists in the movie and contemporary artists. Can an artist who places himself in his studio, a space isolated from the real world-- living in an age where the pursuit of idealistic expression has finished--make work that is relevant to contemporary society? Taiwanese-born Mike moved to Singapore to continue his activities after completing his MFA at CalArts. This work was shot in his studio space, which exists like an island in the middle of the city. The unresolved nature of this work is suggested in the posture of the main character (the artist himself).
The artist may also appear to be a castaway. This trend of showing a sense of loss, of expressionlessness, is something shared by the images captured in this exhibition, and it may also be said to be an expression particular to the young artists of LA.
If we question the role and actions of ‘artist’ as a profession then it may be interesting to consider the work here in relation to Youkobo’s concept of providing a residence to artists where they may pursue creative production while carrying out their daily lives. 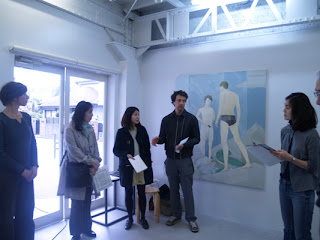 Juka paints artificial environments, such as indoor beaches. For her, these landscapes are theatrical spaces or stages to explore the imaginations and expectations of people. The behaviors of humans in these spaces are like the movement of a non-turbulent wave, seemingly in eternal repetition.
There was a comment that the tones in these paintings resemble frescoes, but the colours in her palette appear more muted, like the colour of artificial skies or, depending on the viewer, the colour of dreams. With a scale close to actual size, the work produces a sense of presence.
This landscape exists on the border of reality and unreality and by employing painting as a medium the artist is also commenting on the artificial qualities of painting. For example, there are people who try to realize an imagined natural space by displaying a painting of the sky in their room. This work makes us consider the painting not just as image, but also the position of the painting itself in the real world. 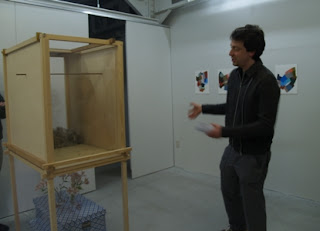 Moving from L.A. into a traditional old house in Yokohama, Krister took notice of the visible dust which built up within the house. As an act of meditating on the ownership of time, he decided to gather the dust of the house that built up over the period of a year. This dust was then placed in a specially made box that reflects the domestic space. In contrast to this box that stands tall, supported by long legs like a Shinto altar/shrine, domestic boxes imbued with a sense of nostalgia are placed on the ground. While being suggestive of the relationship between exterior and interior, top and bottom, the variations in the way of perceiving the work differ according to location and environmental conditions. The sculpture is a document of one year; the act of collecting dust and the time spent in creating the sculpture. The collecting of dust (produced without human awareness) and displaying it in a confined structure brings up the issue of control and questions to what extent environment affects work. Also, the work diminishes the gap between art and domestic space.
The method of making the box also speaks to the process of change that is constantly present. What started as a minimal box gradually became a more complex form, its transformation driven by practical considerations as well as chance.

Editor's comment
After the session, the theme “reflection of the real world” came to mind. That is, through physical observation, the speculation of narrative, the stage of an artificial space, studio space, and sculptural space, each respective artist seems to be investigating this theme through their own approach, which suggests a consideration of the position of each work itself in the real world and the meaning of its existence.
In addition, the act of “repetition” is explored by all works. Our gaze is directed from the ambiguous whole down to smaller details, exposing the reality of the living environments of the respective artists. This supports the definition of being an artist, of starting out from one’s own daily life as someone who observes and considers. When artists produce in this way, art is not the product of a make-believe world but contiguous to the real world.
Youkobo has a mission to support the activities of artists, but this exhibition can be understood to be an attempt to answer the question “what is it to be a sincere artist”.
Continuing on from this we must ask the question: to what extent can those from different cultural backgrounds share, appreciate and consider these works. And, if this is difficult, what sort of support (if any) is necessary. The magazine may serve to deepen our understanding of, these issues.
投稿者 Youkobo Art Space 時刻: 13:47