<Exhibition summary by the artist>
With the stance that exhibitions offer a place to present “research”, I am independently researching and presenting findings about relationships in “spaces” in its broadest meaning. What is meant by “space” here is the context of space within which the habitual experience and perception of space takes place, and what is meant by the title of the exhibition “surspace” (beyond space) is an experience of the space which does not rely on perceptual experience, or in other words an art which aims to secede from dependence on perception. 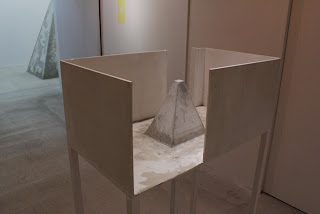 In this exhibition, a large object forming the center and supplementary works around it – exhibition maquette, an elevated plan, a camera set to the ceiling and a real-time video – were developed in the small space of the gallery, making efforts to create an “explanatory” construction. A camera was set at the top of the concrete object which was based on the materials of the venue and the ratios of the building, but as it is arranged on a straight line at the edge of the object, the only image visible is the smooth surface of the top. As a reason for using the camera, rather than trying to capture something outside of the human perception mechanism, it is more because of its use as a tool to extend the human perception mechanism. Spotlights and other artificial light is eliminated, using a display with only natural light which emphasizes the light within the building interior, and the view from the passageway.


<Exchange of Opinions>
Hiroko: The way of capturing light through the medium of video camera, and the sculpture which is matched with the space is very intriguing. The artist Yabe Shiro did work with a similar viewpoint in 2003. Compared to Miyasaka’s method, Yabe made his work in the venue so fine adjustments were maybe easier to make. 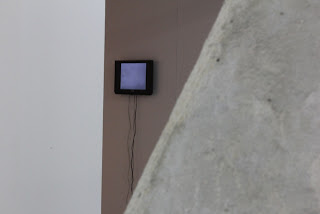 Tatsuhiko: My opinion is that you enjoyed using the space as an experimental gallery. My impression is that you tried to present a “cavity”. It’s a very Japanese feeling, and it must have been difficult to translate the words “空間越え” (beyond space) into English. It was also interesting to see the way you played around with using the video camera. It’s as if nothing is being shown at all. (the premise is that the top of the pyramid is open → however it is closed).
Bart: You seem to have had an awareness of the perspective from the camera, but does the end result simply reveal that the top of the sculpture is flat? What about showing the ridgeline of the sculpture?
Leontine: I think this is an exhibition where the explanatory part and the main sculpture become one.  And I also feel that the static and kinetic elements in each part contribute to the richness of this exhibition. However, it seems that you planned for something different at first, and so what are your thoughts on that?
Miyasaka: This exhibition was not made for appreciation like a normal exhibition, but I think of it rather as a means to explain the venue. This is precisely why I use the term “research.” However, I sense that the end result was summarized in an “artistic” way. 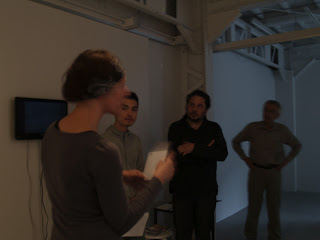 Leontine: If you are seeking a venue to present the result of research, wouldn’t it be more favorable to present it outside, for example, rather than a gallery space which exists as a place for the appreciation of “artistic” things?
Miyasaka: As the architectural space of the gallery is quite minimal, it was quite easy to think about this presentation. However, I honestly forgot the point that “a gallery is a place where you look at art”.
Bart: Is it not also possible to create a report about your research?
Kabata: If your stance is “presentation of research”, then it would be far more stoical to present the work to an academic society, for example. But the apparent deviation in an “artistic” direction ultimately occurs because it seems that you are composing it as an exhibition.
Miyasaka: It is important for me to present my “research” as a concrete thing, so it isn’t preferable to show it just in a presentation.
Shindo: Being able to see skepticism towards the form “research” takes as a global phenomenon and the conventional form of “exhibition” in the activities of a Japanese artist is interesting.
Tatsuhiko: I’m concerned about the effect a 200Kg work is having on the floor of the gallery… 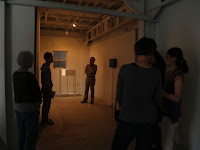 The same degree of opinions and questions about the actual work were also asked in relation to the concept of “research”. This session was joined by a minimum number of participants which included the Youkobo staff and residence artists, but there was still a strong sense that a significant exchange of opinions had taken place. Rather, it was due to the positive involvement of Bart and Leontine, and the theoretical nature of the artists’ dialogue which contributed to the smooth progression of the discussion, making it difficult to make any definitive generalization about it.