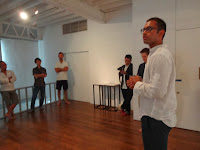 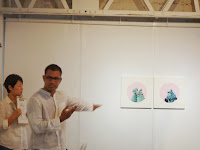 Khai：Concept Outline
I attempt to visually reflect gay culture through my work. During my residency I have attempted to research certain hubs of the gay community such as Shinjuku 2-chome and Wadahori Park. I thought in Japan there was a greater understanding towards homosexuality than in Singapore but I find that in Tokyo its seems to be a hidden presence. There seems to be a stigma towards people who are gay, so there is a difficulty to express oneself directly.
Q＆A
Participant：Why did you select this kind of monster to appear in your work?
Khai：I used to watch all those monsters on TV when I was a child and so I selected the most popular from these. I use them as a motif to symbolize the stigmatization of gay culture but also draw them in a cute way.
Participant：As a result of your research what differences were you able to discern between Japan and Singapore’s gay culture?
Khai：Personally I felt that in Tokyo I had a greater pressure to hide the fact that I am gay.
Participant：How did you decide the size of the work? Was it a response to the exhibition space?
Khai：I didn’t really decided upon it before hand, I just developed it in conversation with Ade as we were sharing the space together. Actually we were originally thinking to turn the space into a maze. 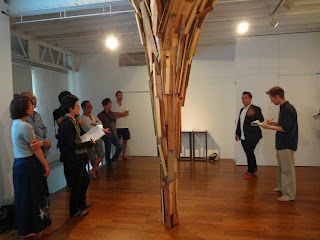 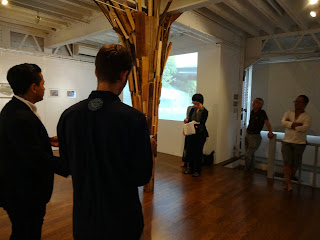 Ade：Concept Outline
Through my work I attempt to express the confusion and dirt of the city. I suffer from OCD so actually I utilize this to enhance the visuals of the work. The work shown here was inspired by my experiences on the Tokyo trains, and I have used various flyers taken from stations to create collages which reflect a sense of urban confusion as seen from the moving train window. In the video installation I contrast scenes of deserted streets with the noise and confusion of the bustling city, while the tree sculpture is an exploration of the monumental images which we find in big cities.

Q＆A
Participant：Does your video of deserted areas of the city have any link with Khai’s work?
Ade: No not really.
Participant： Why is it that you chose to work with wood when tackling a subject of the concrete jungle of the city?
Ade：In order to bring emphasis to the theme and concept of the work I decided upon an opposing material. Expressing the accumulation of concrete buildings through the organic material of wood. 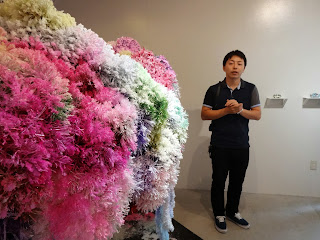 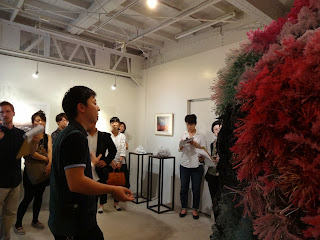 Hijikata：Concept Outline
The main piece in this exhibition is made from a kind of salt crystal, gradually becoming brighter over time, and this idea of “fading in”, gaining light is the main theme of all the work here.

Q＆A
Participant：You use extremely beautiful crystals in your work but at the same time this is interestingly contrasted with the cheap material of tinsel, do you have a particular reason behind this?
Hijikata： I decided to use tinsel as it recalls the memory of fun and joy within a particular community, and I wanted to communicate that image of the collective. I did not really consider it as a “cheap material”.
Participant：Is the black mat underneath also part of the work?
Hijikata：Although I did not originally intend it I think it has now become part of the work.
Participant：I don’t quite understand the relation between the photographs and the 3D works. (Indicating the set of two photographs and two wire sculptures covered in PVA in front of them)
Hijikata：They are both created without intention, something born from coincidence.
(Photos include images of ice built up in the freezer, and the sculptures are created from discarded wire covered in PVA)
Participant： The use of these crystals brings a strong organic image but also has a suggestion of a darker side too…
Hijikata：The shape itself is quite disturbing, some strange unknown form. While the actual materials all have a particular positive association the overall shape itself as you say holds something uncomfortable. It is a misshapen circle as if a clay ring has been squashed to such a form. I decide the exact size at the time of installation. I also usually don’t intend to show the frame beneath the crystal and do nothing to control its color, this is naturally absorbed from the tinsel below.