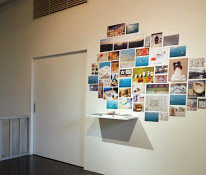 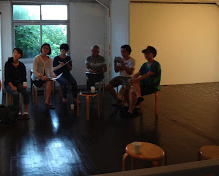 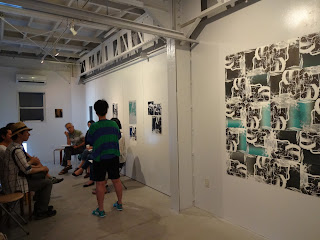 Shih Yun: I undertook the director’s residence at Youkobo two years ago. This led me to propose the idea of exchange program as a way to develop and continue the relationship between Instinc and Youkobo. Project 6581 is named after the national numbers of each country, Singapore and Japan. This time I am here to join the artist in residency program, and I collaborated with robots to make drawings, and to create a new print work with my old friend who run printing workshop.
Visitor: How much did you have a control as an artist when you collaborated with robots?
Shi Yun: I attached brushes and branches, collected locally, to the toy robots purchased in Singapore, and I let them run on the large sheet of paper on the floor freely. I selected some marks I like, but I also picked the kinds of marks I would not choose usually. These marks were photoshoped to be printed in the workshop.
Kaoru: Did you printed by yourself, or your friend?
Shih Yun: No, the technician. Though he is very experienced, it was the first time for him to work with a foreign artist and respond to the irregular requests. For instance, I asked him to put multiple colors (CMY) onto a single roller which normally take one color, or I let them keep printing until the printed ink color gets faded. We printed around 500 sheets overall, and I selected 40 to install on the wall like tiles. I am also showing some prints which came out interestingly by coincident.
Utako: What made you select those prints that are now exhibited?
Shih Yun: I liked the random and accidental marks. So sometime even the test prints turned out more interesting than the final prints. When I was art university student in San Francisco, I was influenced by the works of abstract expressionists, and since then, I am exploring the new way of making traditional ink paint, such as by roller blades and so on.
Justin: Indeed, a cheap paper may bring better result than using an expensive paper.
Kaoru: I got a different impression from the wood pieces.Shih Yun: I found this wooded plate at SEKAIDO, and it felt quite Japanese to me so I used for my work this time. The printed images capture the work in progress in the studio and the studio environment itself, including the curious texture of slide door. I would also like to add that the projected video also documents how the machines were making drawing on the paper placed on the floor, and it is projected low and closed to the floor. 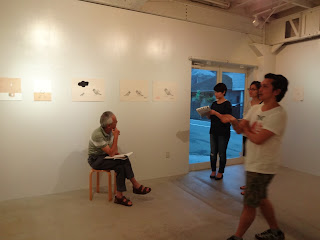 Justin: Studio KURA residency which I joined last time in Japan was located in the middles of country side, surrounded by nature, rice fields. The animals were also very close to people. (Justin introduces his story with chickens who tried to communicate humanly with him when no one else was at the space.) This experience was quite different from the environment in Singapore thus I wanted to reflect the experience to this time of residency at Youkobo, to look into the relationship between nature and human. Youkobo is also felt close to nature. With the work which I used a leaf as a motif, you see the holes made naturally by warms and artificially by human were paralleled. The work reflect my realization that nature is not only providing a food for human, but all other animals, that it connects lives of all kinds.
Hiroko: Could you explain about the other installation works?
Justin: (about the piece with the soil) as if we draw or write personal messages on the sand on the beach, I expressed my feeling by using the soil. (about the piece with the shoes) this is my favourite. I bought the shoes locally and you must be familiar with it thus they may recall some memories of yours.  Though I don’t want to explain too much, but I think children is more close to the land, and nature than adults.
Utako: I also found the way you used Japanese are quite effective.
Justin: Thank to Emma who translated these texts for me. I usually intend to add a sense of humour to my work. Because life is too boring otherwise. Human tend to kick out things which they cannot get their own way, Like how they push the animals out from their territory.
Shih Yun: I see ‘packman’ character over there. How do you intend to relate with the idea of robot?
Justin: I did not necessarily. But I have a collection of images which to be referred to or used for works. The image of bird is also selected from the image collection. About this exhibition, some thought my works were made by Japanese artists. I might have been influenced unconsciously.
Tatsuhiko: The next phase of the exchange project is for Japanese artists to go to Singapore. It is curious how the different urban/city environments of Singapore would influence their works to be produced there.


This time, the report for the session of Renay’s work is not on display, as the artist found her research process is still quite early to be shared its detailed information online. While she is a quite established artist in Canada, she put herself to explore a completely new endeavor and work though her three-months residency without any compromise. On the other hand, Shih Yun and Justin worked in a very certain way so that they can complete the production of works to meet the expectation put on their projects. This contrast shows that the wide ranges of activities are, in deed, possible within the format of ‘artist-in-residence’. Whether for the thinking through experiments or the production for outputting, I believe that all the three artists worked on professional level and achieved certain outcomes which not only they do but we also appreciate.