Arnaud: I'm very interested in Michel Pastoureau's research on the color black. This work relates to his writings about the colour black and its historical relation to fecundity, and to places where people would go for meditation or worship. I would have liked to cover the whole wall with the same surface but this wasn't feasible logistically.
I'm also very interested in the idea of fragility, that a work will continue to change and eventually disintegrate during the exhibition; drawings which destroy themselves.


Kuniyo Motoe: How would you feel then if you were to sign a work, show it in a gallery using the same process where it would disappear during the exhibition? 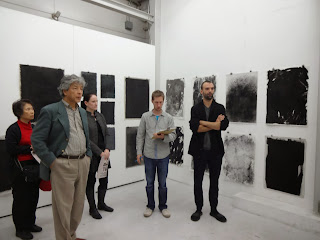 Arnaud: This is certainly something I must consider. I am already considering using photos or video in order to record the process of change.


Suzanne: Can you say something about your reasons for including a white frame on the paper in these works while in contrast completely covering the paper in this series? 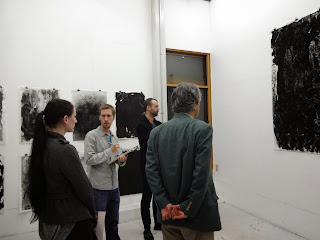 Arnaud: These works with the white frames I consider to be "drawings". They were taped to a board hence the white frame, and to me they are not so interesting anymore only the result of a process. This series where you can see bluish and green tinges were exposed to the elements for a period of time.

Suzanne: How did you decide the timing for bringing these works back inside? Indeed, why did you choose to show them inside rather than outside?

Arnaud: The timing is a difficult thing to decide, something I am still giving a lot of consideration. I guess what is important is to show different stages of the process of the paper's evolution. If they are left outside too long then they end up just like this work here where all the ash and charcoal has been washed away.


Visitor: Did you consider the type of paper used?

Arnaud: Yes. Initially, I had wanted to make my own large-sized paper but that would have required large water tanks and equipment. Instead, I experimented with pulp on different kinds of washi paper.

Tatsuhiko: During your two months in Japan, you have experimented with many different materials. Did any of them leave a particularly strong impression on you?

Arnaud: Back home in France, I am already familiar with most woods which can be obtained, but in Japan I came across many woods not used before. It was very interesting to see how the qualities of the wood led to variations in the hue of black by the charcoal. I also used pulp for the first time. 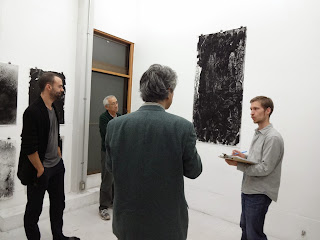 Jaime: You mentioned that these works are simply the result of an ongoing process, and that some are no longer "alive" for you. In Working in such a hands on way with these materials, what would the ideal situation be for you? Would it be to show the audience an ongoing process of change which never stands still?

Arnaud: Yes, that would be the ideal situation. Work that is in a constant and visible process of evolution.