Vo.21. 'The Adventures of Junshi and Stillborn' & 'Nepal' 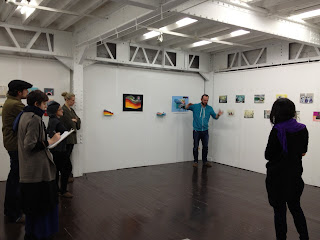 Erik introduced his work by stating that though this residence he has come to work in a way which is different from his usual approach, as to make the large scale paintings which he is used to requires a particular amount of time, of which he did not have the luxury of in this 3 month residence. He therefore turned from large acrylic based canvases to small scale water colours, which served as a form of sketch or diary, and afforded him a greater ability to play in his work. Yet the work shown here is not in a completed stage so Erik felt somewhat dissatisfied or critical at its quality, but hopes to develop them further upon his return to Slovakia. The work consists of a series of experiments which include not only water colours but also small scale models, paintings on wood and collages, often mixing a traditional element such of material or aesthetic with popular culture not only in the images themselves but also in the very medium of painting, for example mixing cola with Japanese ink.

When questioned as to the title of the exhibition Erik explained that he often uses the titles of songs he listens to while painting to name his own work and in this case “Adventures of Ghost Horse and Still Born” was the name of the 2007 album of the group CocoRosie, replacing Ghost Horse with “Junshi”. Junshi is an archaic word used firstly to describe the act of suicide of a woman following the suicide of her lover, a term used in 17th century. However in the language of current day it is used to describe someone who respectfully dies for their duty. Youkobo staff also explained that because Erik had quite a specific interpretation of this term, through his European eyes, it was difficult to translate the title into Japanese, so largely katakana was used as if the term Junshi were a foreign word.

Comments were made that Japan is currently driving to promote its cultural image internationally through the branding of “Cool Japan” in which many characters of popular culture are being utilized, but here Erik takes these characters not in cultural promotion but in a form of criticism of Japanese culture which is quite refreshing.

Gallery artist Maya Lama commented that Japan has a historical romance of suffering ingrained in society and Erik seems to combine both the light pop with the darker sides of Japanese culture. Erik explained that he usually includes Slovakian and other Eastern European characters in his paintings, and in this residence he wanted to combine Japan’s popular characters, with other common images which occur in his work, like water for example, water which flows out and does not return, reflecting the Slovak saying of never stepping in the same lake twice, a metaphor for the need for constant change. Taking these motifs he has contextualized these within the condition of Japan’s cultural and physical landscape. He was particularly struck by the iconic function of the image of mount Fuji which seemed to occur in so much of Japanese imagery and hold a particular place in the mind of Japanese people. He therefore after incorporating this image into his painting went on to add it as a motif to other works which he had already completed. Another example of his adaptation of Japanese cultural images included his interest in a 17th century painting he observed in Yokohama which presented a fire spewing volcano surrounded by water and traditional boats. Erik adapted this image as a symbol of the nuclear disaster and concerns about radiation in the surrounding waters of the East coast, transforming the image of the volcano again into that of mount Fuji and making the traditional boats into the fishing boats of today.

When asked if he plans to work more on this series Erik stated that the work will be presented in a number of exhibitions upon his return to Europe and he is interested to utilize some of the characters in future works, as well as pursuing this way of working with watercolours further, however he is always receptive to the particular environment he is living and working in so when he returns to Europe he will necessarily respond to the conditions there. He reiterated that the rediscovery of water colours as a medium after a break of 10 years he is very enthused to explore their possibilities more. Usually in his work with acrylic paint he uses the paint in very strict clear forms, but with the use of water colour there is something which can not be controlled but can also express an atmosphere more, allowing him to pursue a different style, playing with a new experience. Youkobo staff commented that it is a proof of a residency’s success when an artist is able to make a new discovery in their practice. 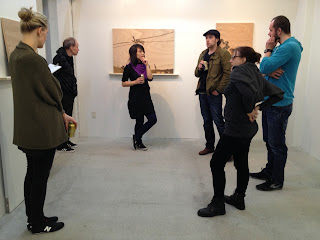 Maya explained that this exhibition was made up of two separate series of work, one dealing with the material of painting and the other hoping to reveal more of the process. Her paintings on wooden panels which reveal large areas of the woods natural grain and even incorporate it into the very image of the painting are a record of place and memory but also an attempt at investing painting with the quality of an object which is why she chose this particular way of presenting the works on wooden shelves. It was commented that these shelves have unwittingly become part of the work and now should not be separated.

It was observed that the titles of the work which were displayed upon these shelves were poetically evocative of a particular moment or narrative. Maya reflected that each painting is a particular memory for her as she grew up in Nepal and the scene reminds her of a particular incident, thought or emotion she encountered at that time, which she also tries to communicate through the text, adding another layer to the work. Youkobo residence artists also suggested that the use of text could be further expanded in future work, in which could even be incorporated into the painting itself, and perhaps Nepali script could also be added to culturally contextualize it but also add a symbolic element which would be purely visual for the majority of viewers. It was also questioned why she had no paintings of Japan, whereby Maya acknowledged that until now she had focused upon her experiences in Nepal, but is currently engaging in developing a series of work responding more to the Japanese environment, yet it was only after she left Nepal that she was able to develop the work shown here in this exhibition so perhaps such distance is needed in order to have a clearer vision of one’s surroundings.

Further conversation ensued upon the material of the work, Maya explaining that she initially started to work in this way because she found the wood grain to be a beautiful image in itself which she felt a shame to completely paint over, and as a result has come to carefully select the panels she works with. Suggestions were made that the work may gain further personality if the panels were tailor-made rather than just using standard off the shelf sizes, but size has not been a central concern of Maya, and it was also observed that the very fact of this standard sizing reveals the possibilities of art’s transformative properties upon objects of mass production.

Youkobo staff also commented that this is only the second time in recent years that a non-Japanese artist has shown in the gallery, which is usually reserved for domestic artists only. However Maya herself was born in Japan, grew up in Nepal and studied in the USA, until recently coming to work in Tokyo, her dynamic background reflecting the fluidity of the contemporary world. Maya explained that identity is a big word but it is something which she continues to struggle with, having the feeling she does not belong in each situation she faces due to her diverse background, and it is when one is removed from something which has come to be identified as home that we come to assert our roots in the hope of clarifying that identity in some way. The title “Nepal” is also a bold statement for the work which Maya was not afraid to confront, but the work here is not to be seen as a national representation but a personal exploration of lived experience.