<The artist requested the participants to initiate the session and share their impressions and thoughts without him giving explanation at the beginning.> 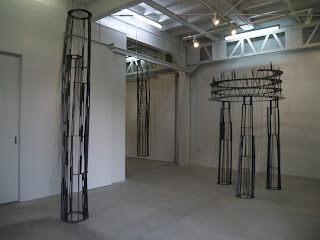 Hiroko: My image of iron is of a solid, dense, and dark-coloured material, but upon moving near to your sculptures they seem to have been created quite effortlessly. Past works gave me the impression of being very thick in appearance, so how has it changed with these works?
Ikegaya: I have certainly used iron with real density before, but for this exhibition I wanted to show iron not as a solid substance, but as a material expressing a sort of landscape. Iron is also an easy material to work with, which was another reason for my selecting it here.
Hiroko: Is it the first time to use wire in a linear way?
Ikegaya: I have used wire mesh before, but yes I am using wire linearly here for the first time. I am including it here in the same sense that “blots” are used in ink painting. Wire is not a solid substance but active, that is the reason why it was desirable in this work.
Erik: It reminds me of the feeling of being stuck in a landscape. It leaves the impression that you are immersed in wind. I have an interest in the origin of the use of circular forms adopted within the work. They are also reminiscent of a ‘tomographic’ image (CT scan or MRI scan) or an x-ray. In contrast to emphasizing the strength of the frame, perhaps the wire can be understood as a kind of drawing.
Ikegaya: The circular forms, depending on how the direction of each is positioned within a structure, possess the image of being in motion. In addition, they also have the role within the structure of giving it more power. The wire was also initially included as a preventative measure against earthquakes, but in actuality I worked on them with the sense that it was a way of “drawing in the space”. As suggested in its title “clouded echoes”, there is an image in the work of sound permeating a wide expanse on into the distance. Bringing people to imagine themselves in the wind is also close to my aim. 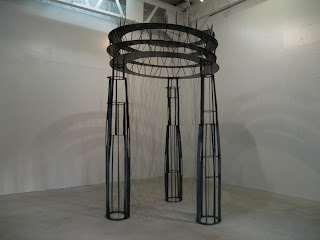 Nic: The point you make of expressing softness through the use of iron which possesses such a heavy image is interesting for me. The relation between drawing and sculpture is also compelling. If you stare at them as a flat surface by closing one eye, it is as if you are a drawing in space. How does the limiting of materials come about within your process of creation?
Ikegaya: I was aware of trying to make the least construction in order to express lightness, while I also placed an importance on preserving a space where your field of view can move freely.
Erik: One thing which came to mind upon seeing the work was that it looked as if a tectonic plate has been hollowed out, and placed on a pedestal with a rabbit on top.
Ikegaya: I didn’t have any image like that, but because I have set them to fit the height of my line of vision, it will look different depending on the person. (this was said in reference to Erik being tall)
Tsuruta: I don’t know if it is because I have little experience of viewing sculptural work, but it was fresh for me to see the outward expressive qualities which the materials themselves possess.
Tatsuhiko: I think the lighting in the exhibition is too strong. Perhaps if it was a little darker, they would appear lighter. (→the lights are turned off)
Tatsuhiko: Unexpectedly, the darker light does give them a heavier impression than the brighter light.
Hiroko: The darker light emphasizes the ‘aspect’ of form which adds a stronger compositional impression to the exhibition, whereas the brighter light makes the work musical and lighter. 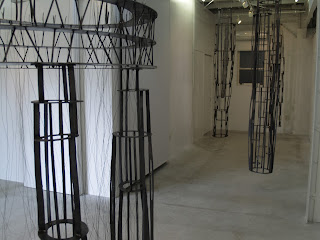 Utako: The brighter light makes the contrast clearer and gives a graphical and airy impression.
Tatsuhiko: If we talk about the light, the impression left by the shadows will also change depending on the positioning of the lighting.
Utako: How do you come to decisions about the structure of the exhibition, including the lighting?
Ikegaya: The venue is in an L shape, and it is a thrilling space to work in. I changed the composition of some elements at the time of installation, and coming into contact with the venue also brought other new ideas to mind. For example, perhaps it would have been interesting if the elements hanging down had been kinetic.
Erik: The idea of moving elements is really interesting. It might have been interesting if, in combination with the title “clouded echoes”, the shadows moved as if like “echoes”. I’m sure echoes realized in visual form would be interesting.
Kabata: I stared at the work thinking that they were organic forms, but when thinking about it forms which can be said to be organic are often very logical in character, and the freedom of this freehanded approach is perhaps characteristic of the artist’s hand.

There was great attention paid by the participants in the artist’s aim of sublimating the profound and solid qualities of iron within an image of spatial extension and musical airiness, and his interest in and enjoyment of the pursuit of lightness. The thoughts of Erik Sille contributed occasionally throughout also added excitement to the discussion. It was a critique session in which it was possible to sense the airiness of the work of an artist with a rich experience in his particular craft.