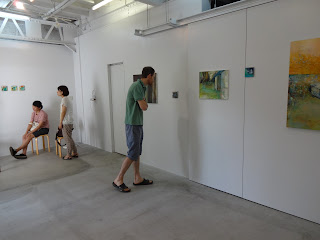 <Explanation from the artist>
By developing subject matter gained through the use of “interview” techniques, I have painted the “memory” of my friend. For this exhibition, taking the story of a pigeon loft belonging to an uncle of a friend who had passed away, I have shown two types of work; the first are paintings which took shape in the imagination after the interview, and the second are paintings based on images found by searching the internet and other sources after reducing the story to the keyword of “pigeon loft”. The images which expanded directly after hearing the story are the large-sized paintings. By clearly dividing the work in terms of those derived from small objects and the size of the work, it is possible to differentiate between these two methods.
In my practice to date, I have used original landscapes derived from myself and inner memories as my subject. But in this exhibition, the “external” method of interview was used for the first time.
Having undertaken video, performance, and mediums other than painting for the past few years, it has been some time since I last worked in the medium of painting. So I would like to hear your thoughts distinctly related to the paintings. 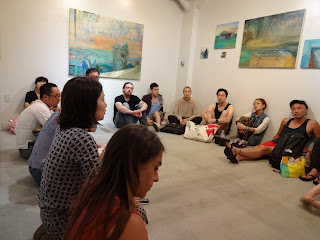 In order to depict a place which I had never been to, I needed external information and materials. And so, I searched the internet, but I have drawn concretely from images I found of spy pigeons during wartime, and pigeon lofts located in Taiwan.
Utako: Why the translation “landscape” in the title?
Sakamoto: An interview is nothing more than the act of re-experiencing the memories of the interviewee. Memories are the lining of peoples’ experiences, and they include the sights or “landscapes” which we have presumably seen.
In the past, I have made video performance works in which I followed someone, and what interested me was the pursuit of someone, an “other”.

Jeremy: Why did you only use painting here when in the past you have used other media?
Sakamoto: There were constraints in the preparation period, but on this occasion what I was seeking was to make a single motif (pigeon loft) exist from a plurality of perspectives, and so painting seemed to be the most appropriate.
Katarina: I understand from your image that there is the duality of both that which is drawn from imagination, and that drawn directly from a source, but is this difference made any easier by altering the size in a physical way?
Utako: Or is it that perhaps you wanted to mix images which depict different worlds? 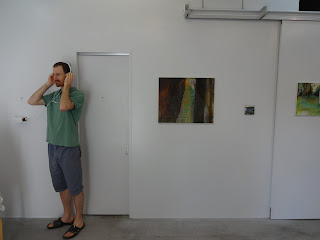 Sakamoto: I felt that I was making links between personal and internal memories and the memories of someone else. I have an interest in the awareness or image of the word “world”. The reason why people who have not paid visits to most of the landscapes of the world are still able to have an image of the “world” is through external information provided by others, which is thus magnified to create an internal “world” image.
Jeremy: In relation to a painting where dreams and reality are mixed, it seems a shame not to incorporate the process of sound? I feel there is a potential to use it in this work.
Sakamoto: I didn’t think about using it in this work, but in my experience I have felt there is a tendency in the genre of painting to exclude sound. However, I had precluded the use of sound from the start of this exhibition.
Utako: At present, sound is a secondary element?
Sakamoto: Yes, at present.

Friend of the artist: I even dramatize my own memory (when producing work), but is this different when dramatizing the memory of someone else?
Sakamoto: There is no difference on this point. In either case, I am making work with the premise that it will be shown to someone else and will become the experience of someone else, and so I try to exclude feelings at the time of production. The images and colours are different on a superficial level, but the same method of production applies in both.
Utako: Did you use the memory of the other in order to empathize with them?
Sakamoto: Yes.
Utako: What if the work was made because the creator actually did empathize with the speaker beforehand? Or perhaps, for the audience there is no difference between the internal memories of the creator and the memories of the other. 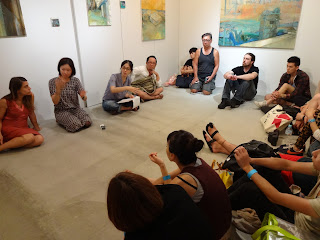 Actually, the interview was conducted with someone with whom I did empathize, but the direction I sought in the work was to gain anonymity which couldn’t otherwise be achieved if it had been created based on internal memories. I believe this anonymity which includes those with whom the creator cannot empathize will become prominent by conducting a countless number of interviews.
Speaker: I don’t know whether “empathy” can be seen to be reflected concretely in the interview I took part in, but the “discovery” that this work was based on that conversation is deeply moving.
Utako: Does it feel like the work hasn’t come from your own words?
Speaker: Yes, it does.

Editors Comment
Rather than investigating deeply into the exhibition and the ways it was produced, this critique session came to give an overview of the artist’s working practice. There were few comments about the paintings themselves which the artist had anticipated, but then from the outset there were few painters who joined the session. I feel there would have been a deeper discussion if the painters who did participate in the session had made more vital comments.
投稿者 Youkobo Art Space 時刻: 15:22 0 件のコメント: